It is my wish, that each individual become familiar with the name of the peoples whom originally occupied the land upon which we’ve chosen to make our home.

Within the (approx. 4200sq km) Sydney Dharug/Eora ‘country’, it was estimated on British arrival, there were around 3000-8000 inhabitants. Today, 30,000 of the 4,000,000 Sydney dwellers are Indigenous Australians. It is one of my dreams (albeit somewhat revolutionary); that the postage marks on the innumerable envelopes and parcels processed each day, carry not only the postcode of the town, but also the ‘Language Group’ name of the area. Imagine… How quickly we could become familiar with, and pay respect to the original occupants of our suburbs.

The men were the ones whom marked and defended territory and family, therefore it seemed appropriate to acknowledge the men as the primary territorial custodians. Imagine receiving your birthday card in the post and acknowledging that it came from your relative residing in Gladesville because it was postmarked 2111 (WALLEMEDEGAL COUNTRY) or your great Aunt from Mosman 2088 (BOROGEGAL), Fivedock 2046 (WANGAL), BOROMEDEGAL, GANNEMEGAL, GAHBROGAL, GAMEYGAL, GWEAGAL, GADIGAL, BIRRABIRRAGAL, GAYAMAYGAL, DARRAMURRAGAL, BEDIAGAL, BOOREBERONGAL or GAIMARIGAL.

Until this is learned, I don’t feel that we have achieved a ‘true’ welcome to country. My comment in these artworks you see before you is quite simply that, wherever you stand, drive or fly, you have entered Indigenous land. We have a responsibility to eradicate the tokenism and prostitution of Indigenous culture within this society.

We now must become serious in revitalising the remnant cultures and consequently reinstalling pride amongst those whom have become ostracized from either or both sides of the fence. Fellow observers of Fine Urban Indigenous Art, ask not “what percentage are you?” but… ”where’s your mob from?” And I guarantee you, the yarn up will begin there. I’d like to personally thank Walkabout Gallery for breaking away from ‘tradition’ in granting me the opportunity to voice my social comment through this exhibition ‘Hand Some Returns’. I sincerely hope, that many a gifted fellow Urban Koori, Murri, Barna, Magani, Yolngu, Tiwi, Nyoongarr, Yamadgee, Wongi, Anangu, Nunga, Kulin or Pallawa artist be granted the same luxury. 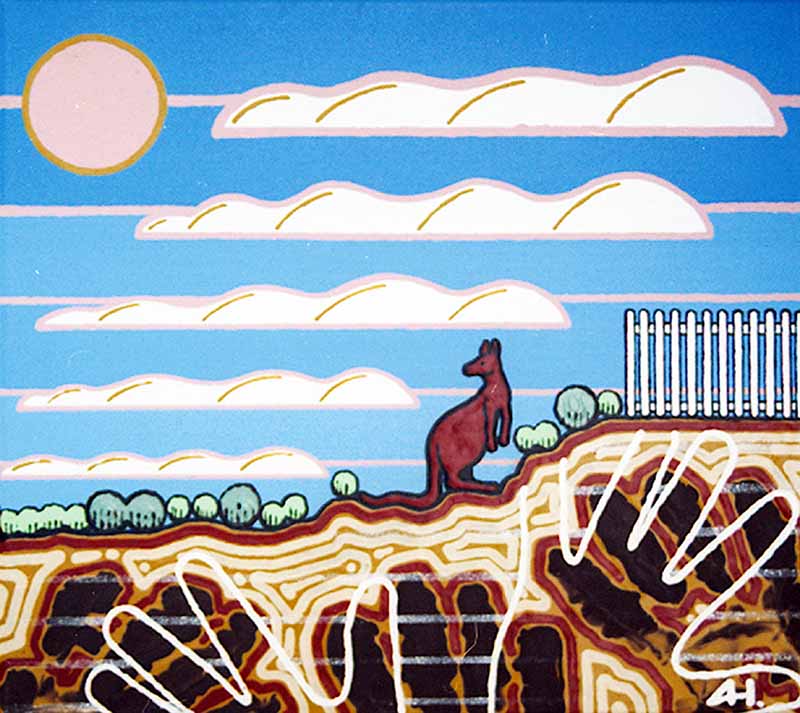 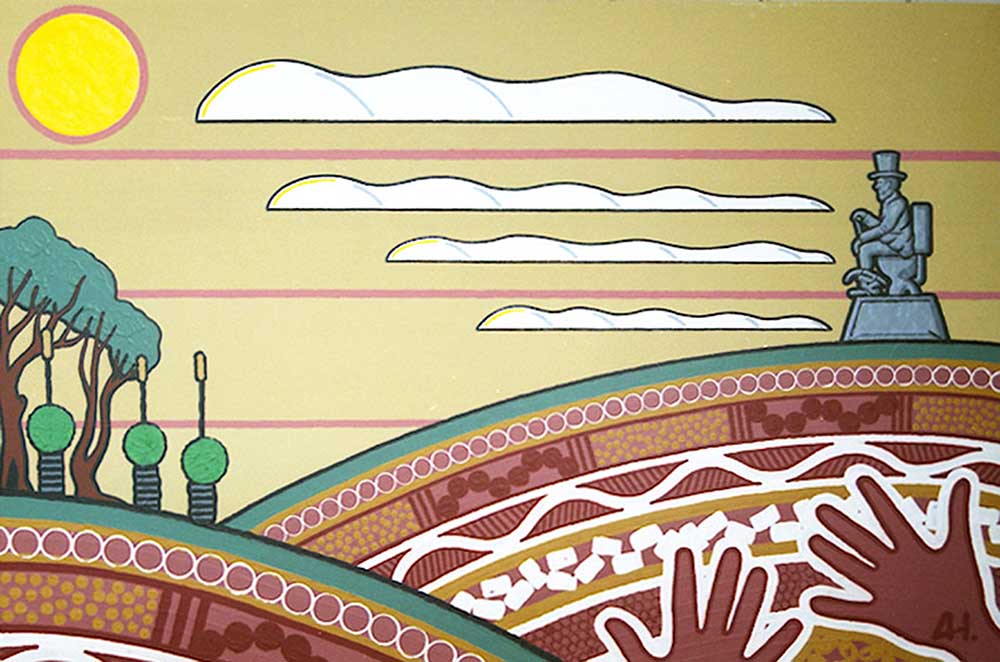 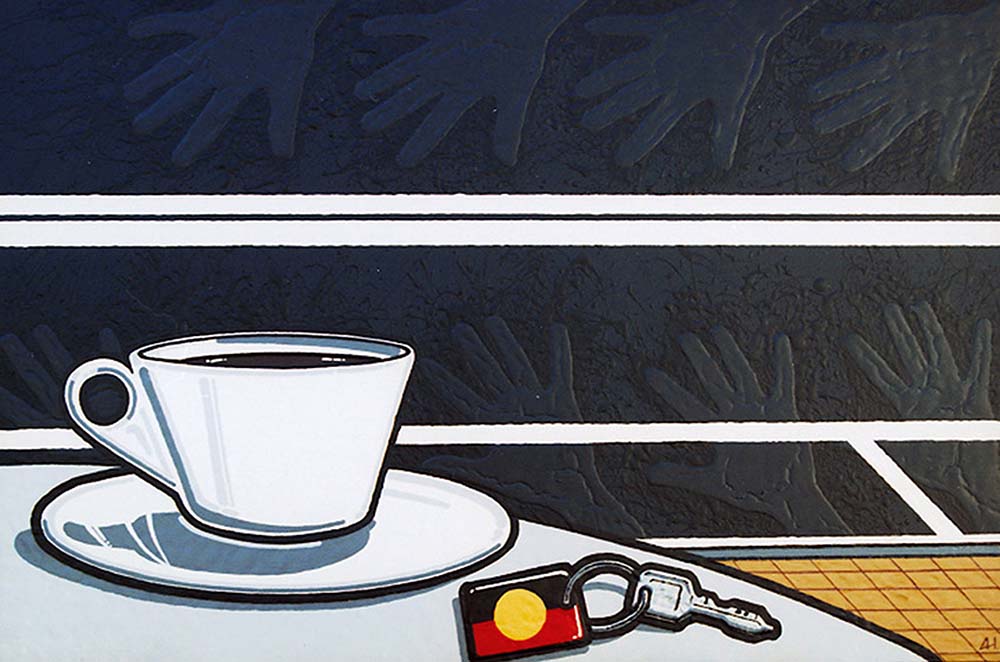 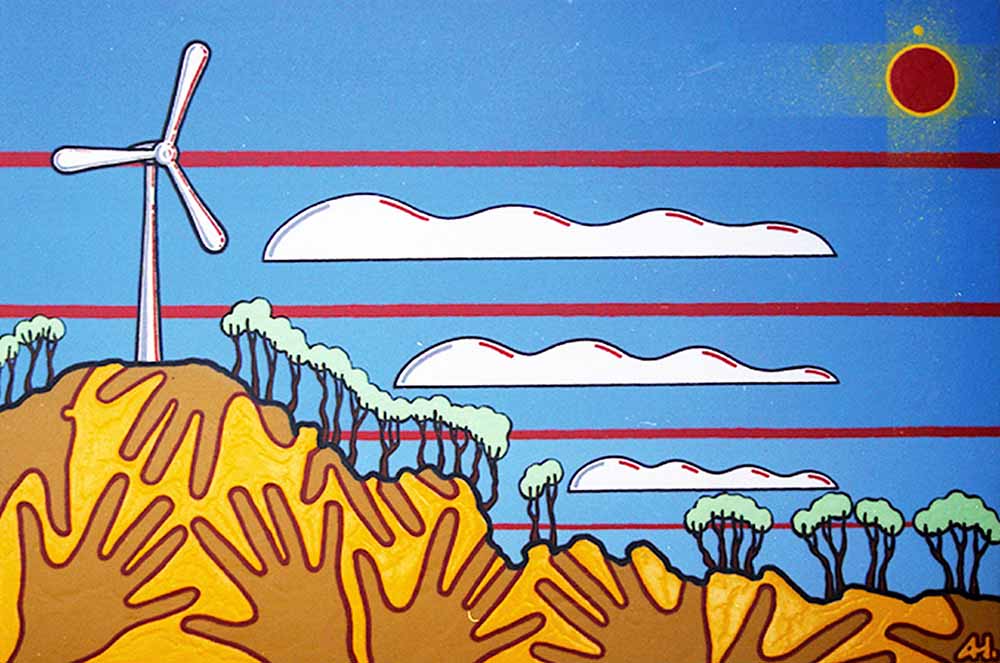 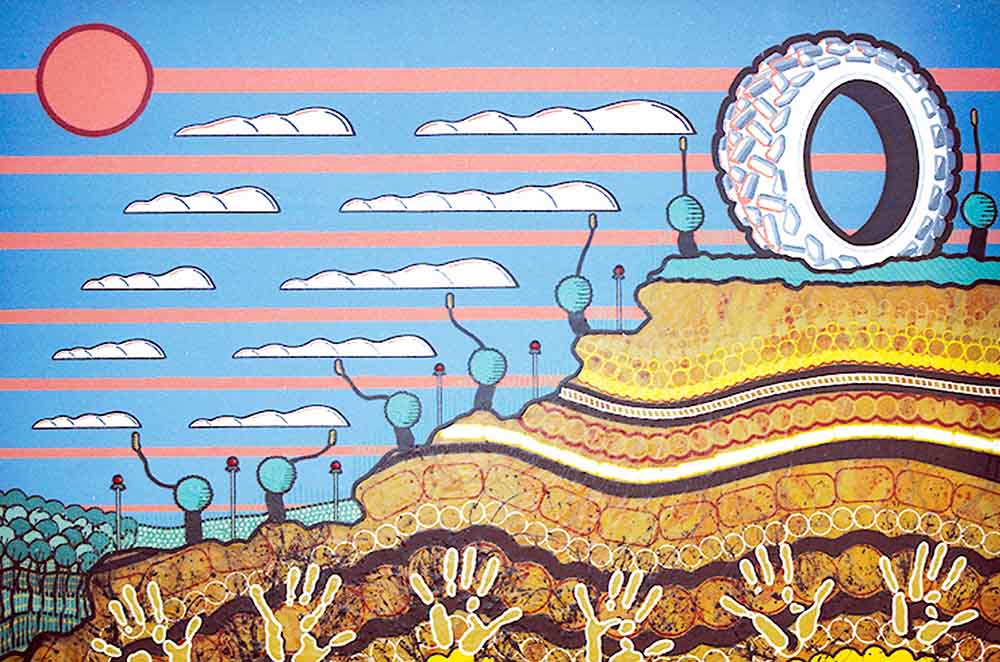 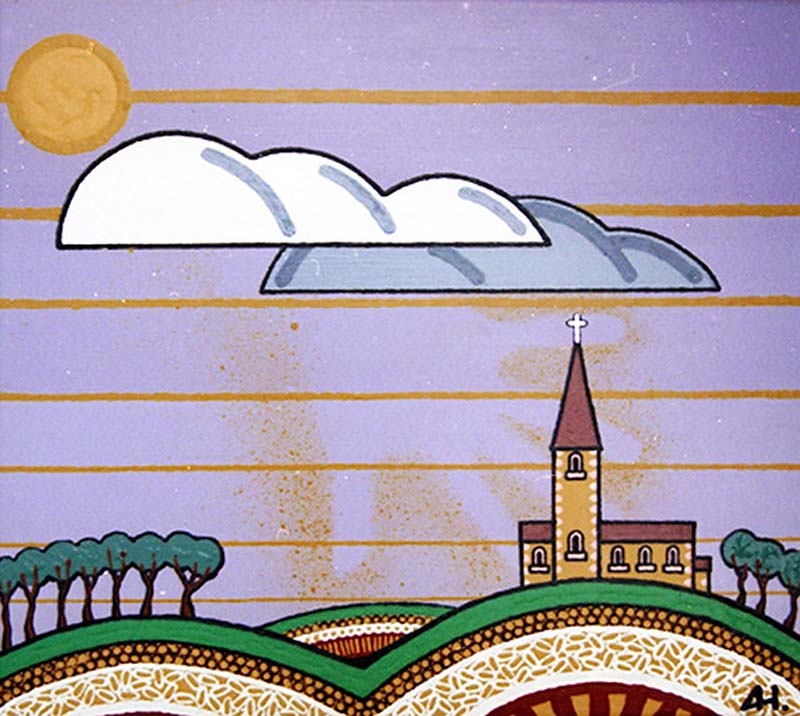 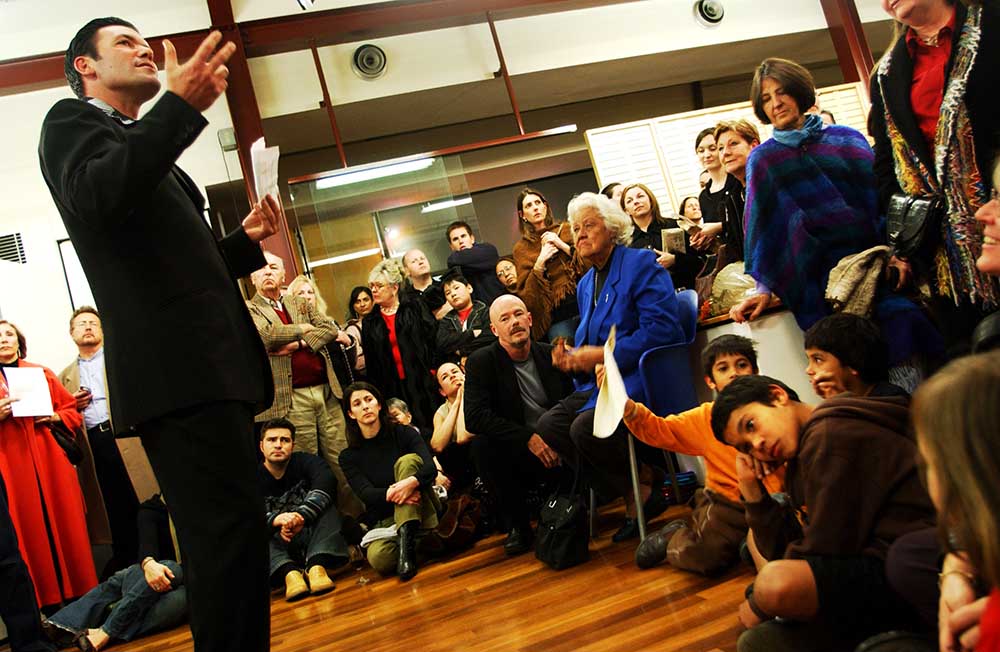 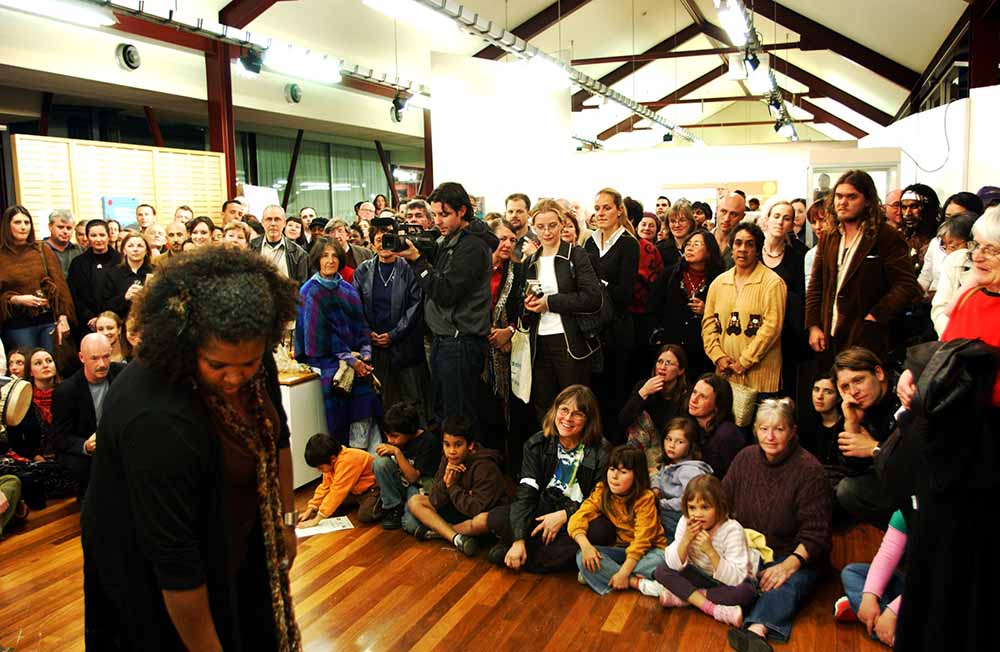 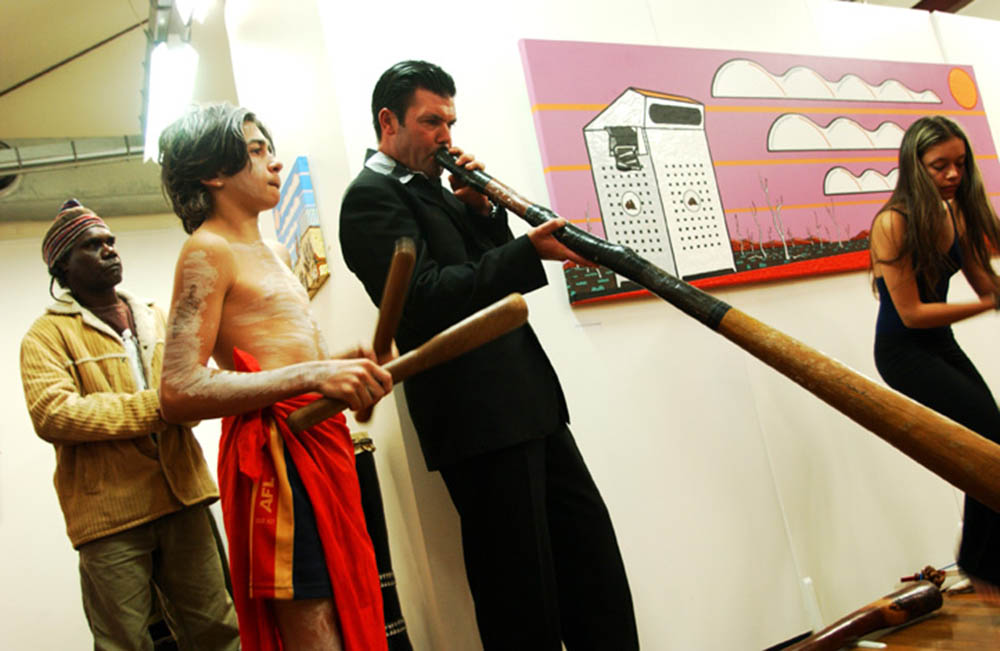