SCOTT! In The Name Of Gov.com

Prime Minister Scott Morrison celebrates being the thirtieth Caucasian leader of “australia” since the Colonists devised their Federation, one hundred & thirteen years after the Aboriginal nation of the Kamay & the Cadigal were illegally invaded by the British.

Once the British had amalgamated the hundreds of Aboriginal countries under one fictitious yet illustrious name (Australia), derived from the Latin ‘terra australis’, they were well on their way to achieving one of the longest lasting genocides on first nations victims of caucasian colonial rule and, the last bastion for the white race on the planet.

Early on, the leadership of respective governance had become both a grand achievement and a ‘Barnum & Baileys’ circus act. Whereby a succession of elite private school boys bully their way to the top via a tailored economic establishment refined to an exclusive club that has NEVER accommodated natives nor females. The largest of the early economies, of course, being livestock. Remarkably the absolute byproduct of successful colonial rule is to psychologically manipulate the working class masses to THINK like the very livestock that built the economy.

(And they’ve even been trained to wave flags!)

This painting fits my overall artistic rhetoric being parody, irony & truth. This recent series of works see a return to the beginnings of my exhibiting career when I’d staged a large solo exhibition in Sydney titled- ‘A sign of the crimes’ (Mori Gallery, 2005). By stylising numerous ubiquitous signage, we’re now forced to abide by, I’ve found new quirky & cryptic messages to play with.

Here, the ‘STOP’ sign transformed literally speaks volumes. Within my trademark landscape, we see on the distant hills the stylised wind farms now as crucifixes, representative of the very invasive religion that prevails it’s dominance here upon Aboriginal country. The ‘army’ of xanthorrhoea (‘Black Boys’) are my dreamed warriors rising to oppose and seek sovereignty once again for first nations. The graphic sky broken into seven bands is a metaphor for the fragmentation of the ‘Seven Sisters dreaming’ across the continent. Fragmented by the inception of five ‘States’ & two ‘Territories’. The large burning sun indicative of the warming up and expansion of the last great desert on the globe. Finally, all new pieces now carry stylised vapour/chem. trails that form a ‘hashtag’. One of the most important characters of communication within the cyber world today. So effectively, all new pieces become #(then the title).

#scott! In the name of Gov. 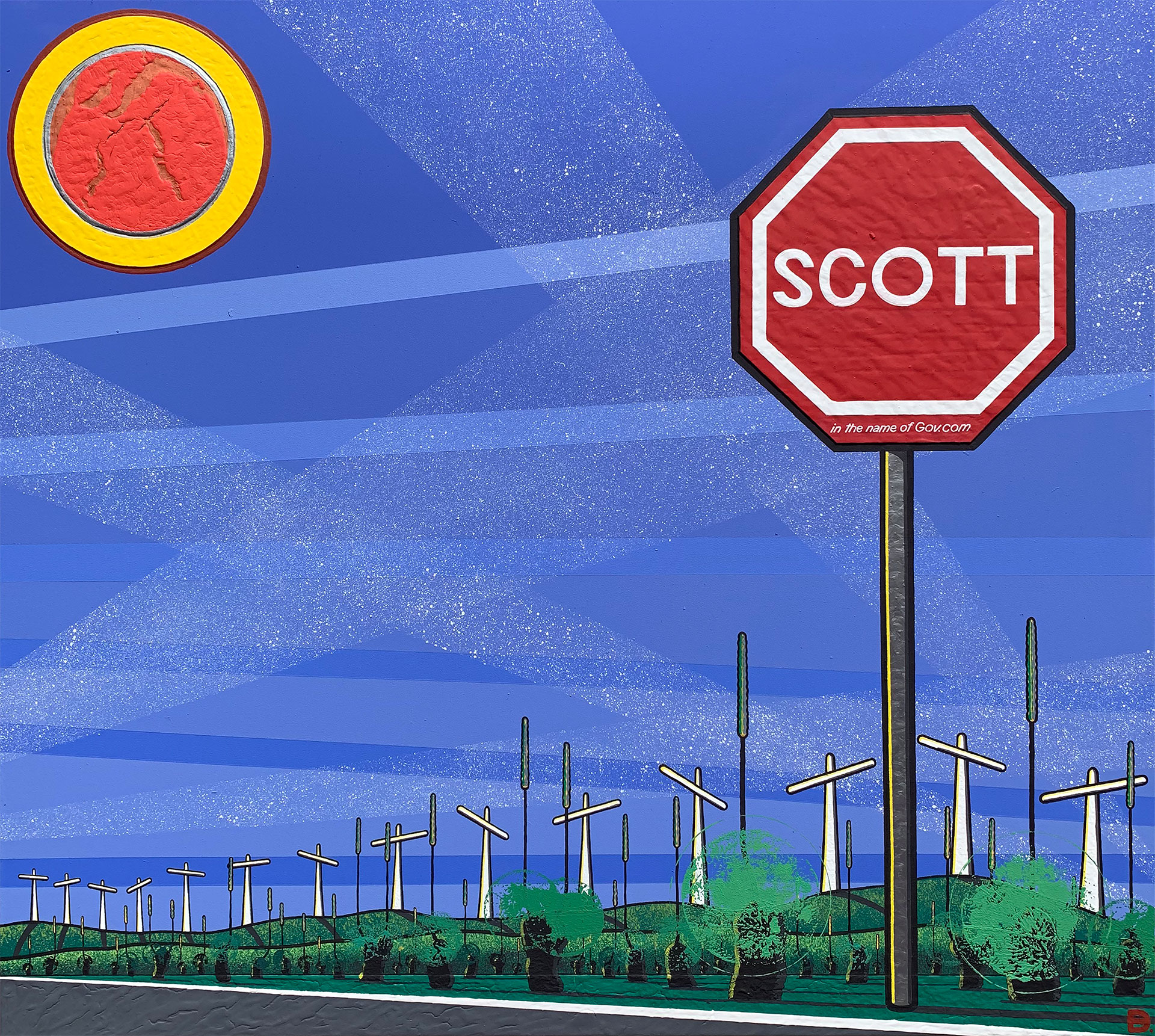